Craig Skiptunis is an accomplished hospitality executive and restaurateur who has more than a decade of experience owning and running establishments in the New York City area. In addition to his own restaurant, Bistro Ten 18, Craig manages the extremely successful Flavor Catering, which handles more than 350 events each year.

Previously, Craig served as a partner with Obivia Bar & Lounge, where his duties included overseeing financial activities and support functions, such as government compliance, investor relations and marketing. Known for its creative cocktails and tapas, and seating up to 175 people, Obivia Bar & Lounge witnessed 25 percent annual sales-growth during his tenure there.

Active in his community, Craig recently received an appointment to the board of directors at the Columbus Amsterdam Business Improvement District, which was founded to increase commercial activity as well as to create a more active and vital business center along Columbus and Amsterdam avenues from W. 96 St. to W. 110 St. by initiating capital improvements and providing services to make this neighborhood cleaner, safer and more prosperous.

Getting to Know Craig

How do you maintain consistency in your catering business, both in terms of the cuisine and the service?

We maintain consistency by being tenacious. This applies particularly to communicating issues and initiating change, so that we continually improve.

We don’t say, “the chicken tasted a little bland today,” and then do nothing. Rather, we research how the chicken was produced and cooked, and assess from where the issue stems. Was it a human error, a recipe concern or some other circumstance? Then, we build a new system to improve the quality and make it more consistent.

Our success is directly linked to this consistency, and our company consistently getting better. The improvements must never stop. The evolution is ongoing. This outlook helps our team members grow their own skill sets, which in turn results in enhanced value for our clients.

What are the keys to running a successful catering business?

To us, this means making sure that every aspect of a client’s event runs smoothly, so our client can concentrate on what he or she is really there to do.

Additionally, protecting the client means more than just problem-solving or successfully putting out fires. It also involves anticipating clients’ needs, developing new, innovative product offerings, and improving as well as expanding our services – basically all of the things that help our clients constantly look great in front of their clients or their bosses.

What is it like running a business with your brother?

I will say, the best part is that we can absolutely depend on one another in a way that doesn’t necessarily hold true for non-sibling partners. We both know, no matter what happens, that we are both coming into work the next day to give it our best. Also, it’s really fun. My brother and I share a similar sense of humor, and we have lots of laughs.

What is the craziest story you’ve encountered running a catering business?

I don’t know how crazy this really is, but it was pretty funny at least. We were doing an event at the Cathedral of Saint John the Divine, and they have a few peacocks that freely roam around the grounds.

The only access for us in and out of the particular building that we were working in was a service entrance – otherwise, we would have to walk through the guest area. As I was doing something in the kitchen, I heard someone down the hall call my name, and I went to see what was up.

It turned out, somehow one of our chefs, while holding a stack of boxes, was cornered by a peacock, which was hissing and making a horrible noise at the chef. We gently worked the peacock around, and got him out of the door.

But we did have to wait a while to load up and start packing up from the event, because the peacock wouldn’t leave through the front door. He stood there guarding it for a couple of hours, and we couldn’t do anything to get out until he finally left.

What is your favorite food and drink of all time, and why?

I love Coors Light. Seriously. I would say if I was on a desert island, and I had to pick one beverage, it would be Coors Light 12 oz cans. It’s so cool, crisp and refreshing. Not too serious, and for me beer doesn’t need to be too serious, it just needs to offer a well-balanced experience with a bag of peanuts.

My favorite food is stuffed cabbage. In our culture, food is more than sustenance, it’s like an internal photo album of experiences. Food is a catalyst that brings people together and creates great memories. In my own life, I can eat something, and it will spark specific memories of people, places and experiences. It’s powerful. For me, I have years worth of memories relating to pots of stuffed cabbage.

What is your favorite restaurant (other than Bistro Ten 18), and why?

I have a lot of “favorites,” but when I want to relax and enjoy some company on a random late night and not get consumed by a “big” experience, I love Balthazar.

I truly love bistros, and this place does the best job in the city. Nothing is complicated, but all really good, and there is more to it than the food – the staff, the energy and the aesthetics are great and comfortable. The energy of that place is astounding, but it’s still relaxing for some reason.

I love the steak frites; Balthazar may have the best fries and compound butter in the city. It’s the simplicity that does it for me, and the fact that nothing is so overwhelming that you can’t just enjoy the wine and some company and sit and relax for a while with no pressure of any kind. 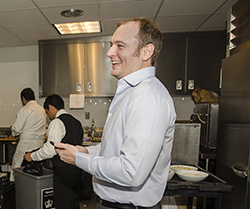 Jon Skiptunis has worked at a number of restaurants, ranging from fine dining to fast casual before, and while, he studied business at Baruch College.

Jon has played a key role in the expansion of Flavor Catering, at first helping with operations to eventually taking this aspect of the business over while Jon and his brother, Craig, pursued Obivia Bar & Lounge, a bar and lounge that they opened with other partners in 2007.

Eventually, Obivia Bar & Lounge got sold. At that point, Jon and Craig developed a strategy to grow Flavor Catering, in the hope that it would lead to a bigger and more efficient infrastructure to meet the diverse needs of its clients.

That plan amounted to a terrific success, as Jon has been responsible for leading all client relations and sales efforts for more than five years now. During this time, Flavor Catering’s revenue has more than doubled, and the company has solidified an important presence in its immediate community and beyond.

Getting to Know Jon

How do you maintain consistency in your catering business, both in terms of the cuisine and the service?

First, it takes understanding from the top that consistency is the most important aspect of our business.  It is a culture that needs to get created and can only exist if every single member of the team believes in it.

We believe a consistent product gives itself a consistent value and, when purchased by our clients, gives them satisfaction, because they are getting what they thought they paid for. Satisfied clients equal doing business again, and positive word of mouth equates to growth. There is no way to do that without consistency, in our minds.

What are the keys to running a successful catering business?

What is it like running a business with your brother?

I won’t lie and say it’s easy, but once you can learn to work as business partners at the office and act as brothers at home, the advantages are well worth the learning curve. Craig and I have a type of trust that I’m doubtful I could ever find with anyone else.

What is the craziest story you’ve encountered running a catering business?

One of the craziest stories is a tasting that I recently did. I was helping to unload food out of the truck, and I bent down to put a box on the hand truck. And, rip!!! My pants split right down the middle. I don’t mean a small rip, I mean a gigantic rip – from just below my waste to where the pant legs meet.

I stood there for a few seconds and thought to myself, “I either go and change at the office and arrive 15 to 30 minutes late, or get there a touch early and do the tasting with my behind showing.” I did the tasting a touch early.

What is your favorite food and drink of all time, and why?

This is a really tough question for me to answer, because I truly love such a wide variety of foods and drinks. Choosing my favorite food is literally impossible, but one type I really enjoy is Louisiana-style cooking. The blend of French, Spanish, Portuguese and Italian cuisines is just amazing!

I love the spicy, salty boils, the Cajun-style steaks, the gumbos, jambalayas, bread puddings and all the peppers, hot sauces and spices.

My favorite drink has to be a Bombay Sapphire martini, slightly dirty with olives. A good martini is an art. Blue Note Jazz Club in Manhattan has one of the best ones I’ve ever had. It is perfectly chilled and has just the right amount of each ingredient. Then listen to some great blues music!

What is your favorite restaurant (other than Bistro Ten 18), and why?

Whether it is to sell the best hot dog or to have the best French cuisine in the world, what I enjoy most about restaurants is the vision, and if that vision is carried out. I would say that one of my favorite places that accomplished this with the best of them is a place called Spice Market.

The atmosphere is really amazing. A Southeast Asian-style place that is beautiful, relaxing and edgy with excellent food

Hi everyone!
Thank you for your support over the past 20 years, Flavor Catering has closed.

We are so grateful for our amazing family of regulars and clientele that have contributed to our success and the great memories for so long. We are sad to say good bye.

Thank you from Flavor Catering